Rock is dead. Some of it’s most inspiring and innovative protagonists are dead too. So it’s no surprise that, in the last ten years, the major American guitar companies have spent all of their creative energy trying make guitars that look like they’ve just been recovered from the sepulchres of entombed twentieth century guitar warriors. What’s the best way to make nitro-cellulose lacquer craze like it’s a distressed 50 year old finish? Chemicals? Razor blades?

Of course, there’s no point just trying to buy original old guitars because Joe Bonamassa has already bought them all.

Meanwhile, Yamaha, who have been designing and building guitars since forever and electrics since 1966, continued to experiment and develop ingenious solutions for the modern guitarist, un-noticed by the fanboys.

In 2005, Yamaha surpassed themselves when they developed the Yamaha RGX A2. It was a revolutionary concept. Although it was actually fairly traditional in construction, its introduction sent a shockwave through the guitar playing community. It had a battery powered electric light and two silver lines painted on the front. The question fizzed and crackled through the guitar forums endlessly, "What are the silver lines for?"

In retrospect, Yamaha made a bold move with the RGX A2, but they also made two fundamental mistakes. They forgot that guitar players are less open-minded and adaptable than an elderly Scottish Unionist and then they let the designer have absolute control.

Like Leo Fender in the fifties with the Tele and the Strat, Yamaha used the RGX A2 to experiment with the assembly line construction of affordable electric guitars. Where Fender tried pine, alder, poplar or ash for the body, depending on availability and workability, Yamaha experimented with a lightweight wood, wrapped in a thin, hard wooden shell. The result was a very light, comfortable guitar with the attack and resonance of a semi-acoustic. The strings were fitted through ferrules in the back and the bridge mounted on three soundposts through the body, also fastened at the back. This combination of wood, bridge and soundpost was the real Yamaha innovation, and the marketing people called it A.I.R. (Alternative Internal Resonance). The rest was window dressing.

Despite the sci-fi marketing, the RGX-A2 was surprisingly traditional. Three-a-side machineheads furnished one end of a bolt-on maple neck (C profile, 20mm – 22.5mm deep) with a rosewood fingerboard (12 inch radius). There were two P90-size humbucking pickups - and I don't mean similar to P90-size, I mean exactly P90-size. These went through a passive wired 500k volume pot and a rotary pickup selector (more on that in a bit). A six saddle bridge fed the strings through to six ferrules in the back. There was a battery compartment to power the pickup indicator lights too, but if that’s radical futuristic design, so are christmas trees.

So it's the 21st century, it's an electric guitar - obviously you're going to make it look like something an Imperial Storm Trooper would lift out of the locker for Open Mic night. It had a high gloss finish: mostly ‘Aircraft Grey’ with a white front, unless you bought the black version which I assume was ‘Aircraft Black’ with a black front. Controversially, it had the model name RGX A2 written on the body instead of the headstock. That was already a risky design decision, but then Yamaha compounded it by painting two lines on there too.

Guitarists are like chickens: they'll quite happily run along any line you give them, but give them two and they're paralysed. I mean, two lines! What are they even for!

Although the real innovation was in the body design, there were some other ingenious design decisions. One was the replacing of machine head buttons with barrels. A modern electric guitar strung with .009s, .010s or even .011s has absolutely no need for big buttons to wrestle the guitar into tune. And unlike buttons, barrels don't get knocked out of tune every time you have to swing round and thump the drummer for speeding up. 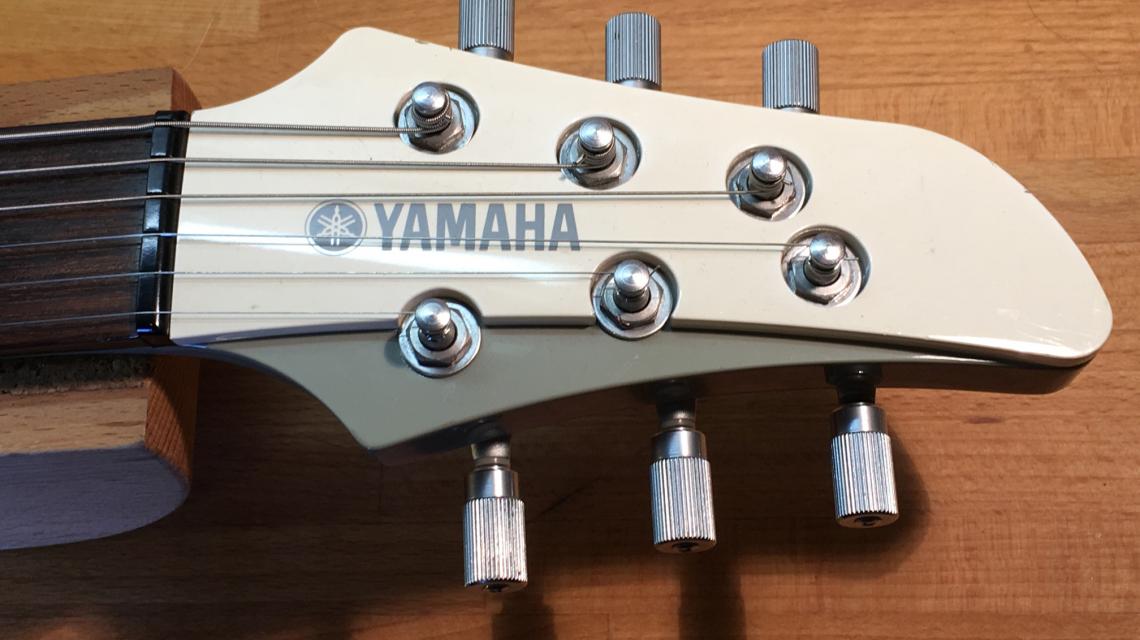 The machineheads were fastened with nuts in the traditional way, and a plastic fascia clipped into place on top. The sculpted effect of the fascia looked gorgeous, but then the only way to make sure the machineheads were secure was with a box spanner, the fascia blocking any side access. As most guitarists don't have box spanners, the tuners would work loose and the cry soon went up ‘it needs proper tuners’. This, combined with the American exceptionalism which blights many a guitar forum, meant traditional Grovers. 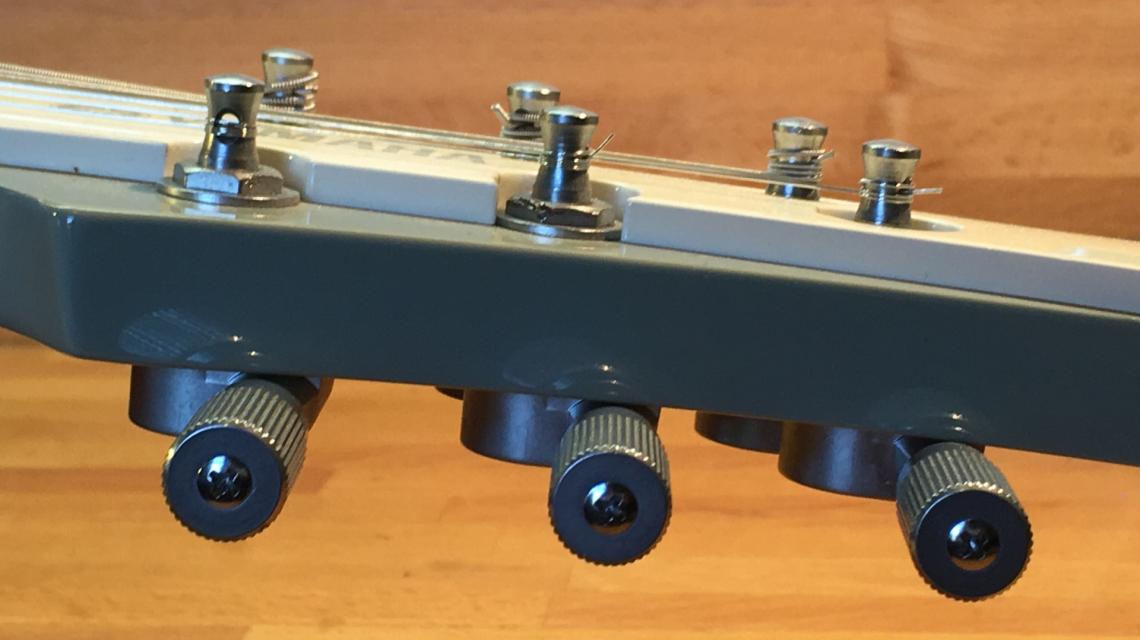 The other problem with the plastic fascia on the headstock was that it sat perilously near to the line of the string from pillar to nut. It looked gorgeous but tickled a niggly feeling - did the designers ever string this guitar themselves? Was this a hint that the demand for fabulous visual design had overridden the ergonomics of the guitar?

Talking of American exceptionalism, it is a truth universally acknowledged (among guitar players) that the best electric guitars are American electric guitars. It is further acknowledged that guitars built in Japan, followed later by Taiwan, Korea, Indonesia, China, India (slot in latest hi-tech low wage country to suit) are shite. This truth is only adjusted when a new country is added to the list and enough time has passed for the previous factories to become semi-mythical and their product ‘vintage’ or even ‘rare’.

Further, it is also held to be true that all these cheap guitars not from America are blighted with poor electrics because that’s where the manufacturers cut corners. Frankly, I’m amazed that no-one has thought of this before: all you need to do is buy a cheap Asian built guitar and retro-fit top quality pickups and you'll have the most brilliant awesomest guitar ever and still have money left over for an ice-cream float! Cream Soda, mmmmm....

Well, the Yamaha RGX A2 featured P90-sized humbucking pickups with Alnico magnets, designed in California, with 4 conductor wiring, which came in around 8.5k – 9.5k. These were obviously shite, not being made in America. But Dimarzio P90 (Soapbar) pickups are a straight shoe-in, being the same size, shape and construction, designed in California with 4 conductor wiring and everything.

For the rest of us, the pickups are fine. A bigger issue might be finding an amp with the headroom to handle the RGX A2’s dynamic range.

The bridge is gorgeous. It’s just beautifully designed. Six saddles adjust in height and intonation via grub screws which sit inside the assembly, so each saddle is a smooth flat surface rolling off at each end. If you rest the heel of your picking hand on the bridge, for muting or stability, then you'll find this one very comfortable. 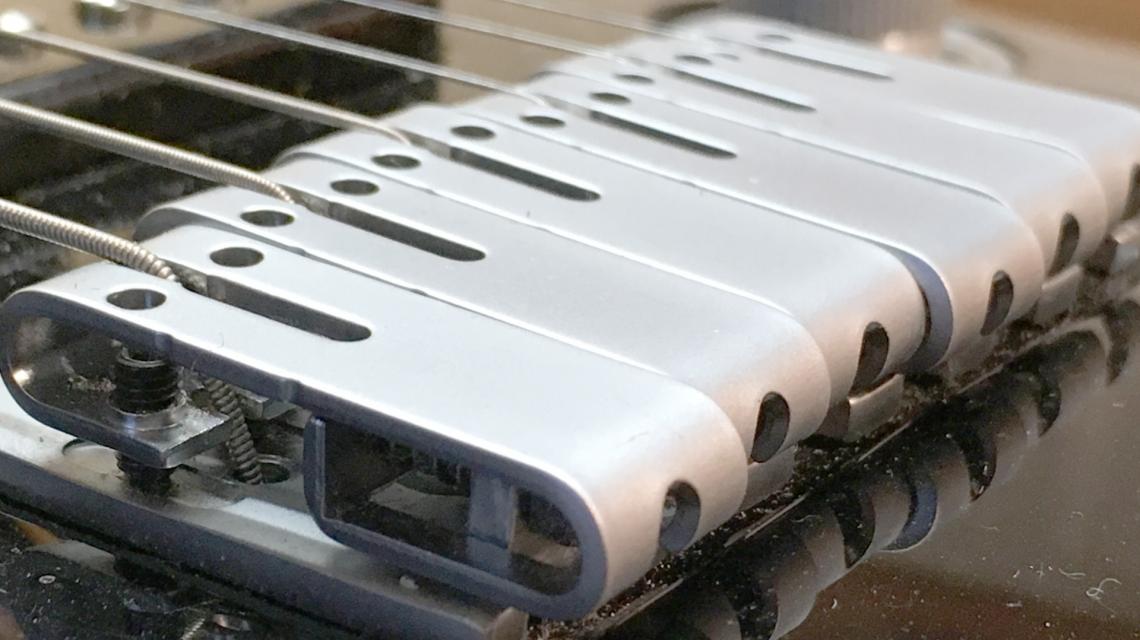 If the headstock hinted that the visual design had trumped the ergonomics, the electrics scream it. The guitar looks lovely; there’s a rhythm in the position of the pickups and the bridge and the two knobs - a simple visual balance. But why are the knobs recessed? What are the two knobs for? Volume and Tone? So where’s the pickup switch?

It looks like the senior designer came up with the two knob look and when someone pointed out that there was no pickup switch the room went very quiet. And then, after a tense pause, "Of course there is a pickup selector, it’s— that... that is what the second knob is for!".

Do you use a plectrum to play your electric guitar? Do you use your fourth finger (little finger, pinkie) to flick the pickup switch, or adjust volume and tone on your guitar while you perform? Well, bugger off, because the designer of the RGX-A2 was obviously one of those fingerstyle smart-alecs who could adjust volume and pickup selection mid-performance with the full use of opposable thumbs.

Because the knobs are partially recessed, the volume is awkward to adjust too, just because there isn’t much to grip with your little finger. Where a traditional electric control knob offers 15mm or more in height to wrap your finger round, the RGX offers around 8mm. And the same is true of the tone control— except there is no tone control. Unless you mod.

There’s certainly scope for modding and there is room in the control cavity for at least one more pot or switch. Pots are mounted on plastic rings embedded in the hard shell, so my best guess is that this makes for stronger assembly, with less danger of the pots just getting punched through if the guitar comes into contact with a short sharp shock.

The simplest mod is just to replace the stiff rotary switch with a blend pot. This does mean that you forgo the dubious pleasure of having the lights change when you switch pickups, but as no–one else seems to have pointed out, the guitar player is the only person who can't see the frickin’ lights anyway.

Having modded both my RGX A2s, I might write some more on this later.

The RGX A2 was built for around 10 years, first in Taiwan and later in Indonesia. The model was discontinued in 2016. At the time of writing you can pick one up on Ebay for £150 or less, which is just silly money for such a remarkable instrument. If you have an issue with 4kg beasts dragging down your shoulder, if you want a lively, dynamic and expressive electric guitar, if you want something that sparkles for soul and funk rhythm playing, try it out. Current Yamaha UK RGX A2 page

But what were the lines for?

I know we've not been in touch, but I'm certainly thinking of you today. Go well.

Where can I find a saddle for my RGX A2? I need help

Could you post the mods performed on your Yamaha RGX A2? I have one and I'm thinking about change the electrical parts...

Yeah, I will. but it won't be for a few days. Thanks for the interest though. They're great guitars.

Curious to the mod. Would be great to have just a few regular controls on it.

Great article...I keep coming back to.
Finally getting around to replacing the pickups in my RGX-A2 .... Looking at the dimarzio link about soap bar pickups...... dimarzio.com/pickups/soap-bar.

As I don't want to screw this up looking for suggestions.

This article is so good. I laughed several times ( tearfully), thanks a lot. Only thing i regret now is discovering the land of manufacture...oh well, time to try not to be a snob and just buy one anyway...

I bought an RGX A2 several years ago based on weight alone. I like it a lot, but I'm having trouble finding a tool to adjust the truss rod. Any thoughts?

I am an elderly Scottish Unionist. Is this guitar available in a non-removeable Union Jack finish?

The problem with replacing or overlaying the paint finish is that you’re going to compromise the directing of psychic energy designed into the original finish. The Union Jack pattern in particular is just going to spaff out your creativity and drive all over the place. Look at those multiple lines and layers - no focus or direction!

And, as any guitar tech will tell you, there’s no such thing as a non-removeable Union Jack finish.

My guitar repairer has suggested routing the existing holes out and dropping in a telecaster 3-way switch plate with Vol/Tone knobs that push/pull to give coil splits. It should be a nice upgrade.